Jerusalem Cafe would be a wonderful lunch spot

I realize the Jerusalem Café has been in downtown Vancouver since 1996 but we just went last night…a little slow, I know. Frankly I’m a HUGE fan of Nicholas in Portland so it was with a bit of trepidation that I agreed to Jerusalem Café. That, and the fact that it was really cold last night and parking at Nicholas usually requires a fair amount of walking outside and the popularity of the place causes lines outside at times.
The service at Jerusalem Café...
Read Full Article

When Jerusalem Cafe gets it right, you’ll have a hard time putting down your fork.
With lively flavors that dance around your tongue and hefty portions, the restaurant invites diners to feast on the charbroiled meats, fresh vegetables and fragrant herbs that are the backbone of Mediterranean cuisine.
The family-owned restaurant sticks to tradition, but rightfully takes ownership of classic dishes. Even if you’ve had plenty of falafel, kabobs and hummus in the past,...
Read Full Article 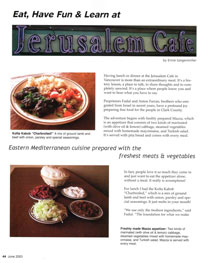 Eastern Mediterranean cuisine prepared with the freshest meats & vegetables.
Having lunch or dinner at the Jerusalem Cafe in Vancouver is more than an extraordinary meal. It's a history lesson, a place talk, to share thoughts and to completely unwind. It's a place where people know you and want to hear what you have to say.
Proprietors Fadul and Anton Farran, brothers who emigrated from Israel in recent years, have a profound joy preparing fine food for the people of Clark...
Read Full Article 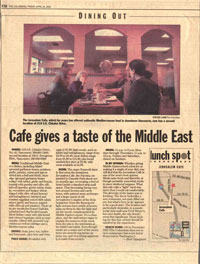 Cafe gives a taste of the Middle East