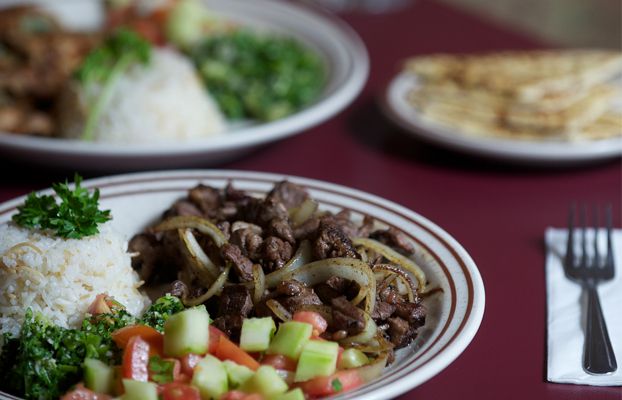 When Jerusalem Cafe gets it right, you’ll have a hard time putting down your fork.

With lively flavors that dance around your tongue and hefty portions, the restaurant invites diners to feast on the charbroiled meats, fresh vegetables and fragrant herbs that are the backbone of Mediterranean cuisine.

The family-owned restaurant sticks to tradition, but rightfully takes ownership of classic dishes. Even if you’ve had plenty of falafel, kabobs and hummus in the past, unless you’ve visited either of the two Jerusalem Cafes in Vancouver, you haven’t tasted these unique takes.

It’s heartening to see a kitchen still hustling after 17 years in business, rather than sitting back and resting on its solid reputation.

In 1996, the first Jerusalem Cafe opened downtown at 106 E. Evergreen Blvd. Six years later, owner Fadul Farran — and his family, who followed him here from northern Israel — expanded into a second location at 516 S.E. Chkalov Drive. A third restaurant in Battle Ground opened soon after, but the Farrans eventually renamed it Old Town Burgers and Breakfast and transitioned toward American staples.

During a dinnertime visit in late March, Jerusalem Cafe’s downtown dining room was empty. A slow, but steady, stream of diners revolved in to grab take-out orders. The restaurant’s flagship location makes it easy for nearby workers to breeze in on their way home and pick up a quick dinner. There’s no extra charge for take-out.

But eating in has advantages. The dining room is modest and inviting, the staff are friendly and direct. My server wasn’t shy in recommending I change one of my orders to something he thought would pair better with the other choices. For those unaccustomed to Middle Eastern food, the staff’s expertise could be invaluable.

Of what I tried, the Garlic Lemon Chicken was the absolute standout. The first bite was intense. A salty citrus punch hit first, but more-complex savory flavors were soon revealed. The ratio of garlic to lemon juice to olive oil was spot-on, a mix of strong flavors without any one taste overpowering the others.

The lamb Shawarma was also impressive. The roasted meat bits were slightly overcooked and tough, but the sautéed onions and spice made the extra chewing a joy nonetheless. The warm pita bread that accompanies the Shawarma and other meals is thick and fluffy and perfect for dredging through hummus or sponging the plate clean of rich juices.

But it’s not all home runs; some items fall flat.

You can’t go wrong with the silky Hummus or bite-sized crispy Falafel balls, but I abandoned a couple of the other side dishes after only a few forkfuls. I wasn’t keen on the much-too-bitter Tahini sauce or the clumpy and bland Babaghanooj, a roasted eggplant spread that is usually one of my favorites.

Try the Mazza Platter sampler to test-run these and other items to figure out what works for you.

I was also underwhelmed by the Kofta — ground lamb and beef mixed with onion, parsley and seasonings. On paper, that sounds superb. But I was served pressed pieces of meat — reminiscent of cafeteria hamburger patties — that were cooked until dry, leaving them devoid of all but faint flavor.

These negatives were few and far between and shouldn’t dissuade anyone from giving Jerusalem Cafe a shot.

Come with an appetite, or at least prepare to haul leftovers home, as dinner portions are filling. There are “light” options on the menu — including plenty for vegetarians — but those will still likely leave you with a satisfied, if not-quite-overstuffed, belly.

Prices are modest, with most meals around $11 to $13. With a starter and some freshly made Bakalava for dessert, you should expect to spend around $40 on dinner for two. At lunch, you could get away for $10 or less.

Health score: Jerusalem Restaurant and Cafe on Evergreen Boulevard received a score of 32 on April 16. The Chkalov Drive location scored 5 on March 8. Zero is a perfect score. Clark County Public Health closes restaurants that score 100 or higher. For information, call 360-397-8428.