Jerusalem Cafe would be a wonderful lunch spot 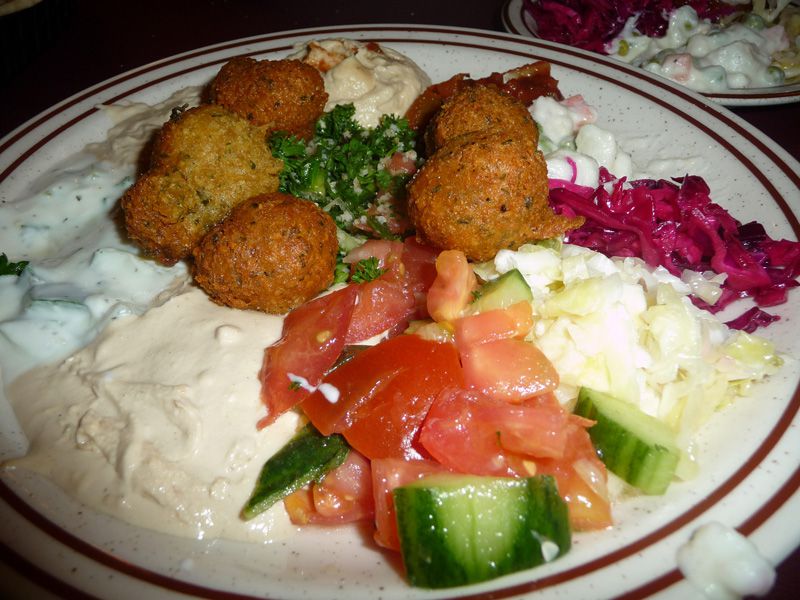 I realize the Jerusalem Café has been in downtown Vancouver since 1996 but we just went last night…a little slow, I know. Frankly I’m a HUGE fan of Nicholas in Portland so it was with a bit of trepidation that I agreed to Jerusalem Café. That, and the fact that it was really cold last night and parking at Nicholas usually requires a fair amount of walking outside and the popularity of the place causes lines outside at times.

The service at Jerusalem Café was wonderful. Everyone was very nice. I liked the ambience, as well, although it was a bit cold inside and we weren’t sitting in front of the door.

I really enjoyed my Israeli wine. It was a Merlot which our server recommended over the Cabernet Sauvignon. I’m a Cab gal but I went with his advice. It had a nuttier taste than Merlots I’ve had in the past which actually made sense to me. Again, I liked it.

I ordered the vegetarian mazza platter and just really missed the opportunity to have spinach pie, or mjadra (which is amazing) but their lentil soup was terrific; it really hit the spot. I very much liked their falafel balls, hummus and potato salad. I also had babaghanooj for the first time and was not disappointed. The portion size wasn’t the same at the restaurant I’m comparing it to, either. There was a lot of sour on the plate…the red cabbage dish, green cabbage dish and Mediterranean salad. Maybe that’s more traditional but I’ve had other experiences with Mediterranean food and not run into so much sour in the past so now I’m confused.

My husband had Chicken on Fire and did not find it to be the least bit spicy though he enjoyed it. You pretty much have to throw a match in my husband’s mouth for him to notice. He was barely fazed by the wasabi at Mio Sushi a couple weeks ago or his number 5 dinner from Thai Orchid.

All in all I’d go back for lunch but probably not for dinner. It was just missing some of the options I’ve come to love at other Mediterranean-inspired restaurants. It certainly seemed a favorite with a lot of other people so it could just be me.